I was at a concert recently where the group, Train, which was formed in San Francisco, played from their new album, Save Me San Francisco.  I thought it an interesting title given that they have to play in about 50 other cities on their tour and I doubt they would tell people how, “Chicago is great, but we’re here to tell you about San Francisco”.

I admit that I have had a lifelong love affair with San Francisco.  Fortunate to have been born here and even more fortunate to still work and have a family here, I try not to take it for granted.  Even my wife who is from the East Coast finally has broken down and said this is the perfect place to have settled.  “It has soul.  It has character, ” she once told me.  She’s right.  But it isn’t just the City.  It’s the people too.

Now don’t get me wrong.  Having spent years working in Chicago and New York and various other cities, I love those cities for many of their merits as well.  And the people there are so real and loveable in their own way and sometimes even more loveable than San Francisco.   I’m sure everyone feels that way about where they are from, so excuse me while I gloat.  After all, Conde Nast Traveler’s reader poll  did say that San Francisco is the best place in America, so they can’t be that wrong, could they?

Yes San Francisco has it’s Golden Gate, it’s nearby Napa wine country, and the beautiful Pacific coastline, but like every beautiful painting or landscape, the object of your desire has to have depth which keeps you coming back for more.  It has to engage you, frustrate you, encourage you, entertain you, and most of all, leave you breathless in amazement as you look back over your shoulder as to what you have been through.  For me, San Francisco has always been “all points pointing west” whenever I look for that solution.

Maybe there really is something magical about San Francisco.  For my whole life I’ve known people who have moved to this city I call home.  They come here to find themselves, to discover acceptance for who they are, or just to begin again.  In the 1800s there was the Gold Rush, in the 1960s it was the hippies and free love.  Today it is still for the technology as well as an alternative style of living.

As a native, I’m not looking for much of the new so much that I am looking to have more of the same and in some way to revisit those things which I’ve enjoyed so much about the past, and some recent small events have gotten me to thinking about those healing powers of the City once called by Herb Caen, Baghdad by the Bay.  They might not mean anything individually, but together in reflection they do. 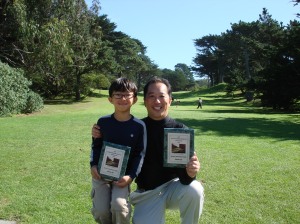 Nick and a Proud Dad

A few weeks back on the golf course in the 56th Northern California Family Golf Championships with my son.  The tournament is one that I started playing with my own dad when I was in high school.  It was my way of getting closer to my dad doing something he enjoyed.  We played many times and it wasn’t until my early 20s that we finally took home a trophy for our flight.  I still remember that hug and that smile and laugh my dad gave me when he won, “We did it,” he exclaimed.  It was an aw-shucks kind of smile, but it wasn’t until now that I realized he really did enjoy it as much as I did.

With the shoes reversed some 20 years later, I became overwhelmed with a sense of deja vu.  I kept looking at my son and remembering all the great times I had in this tournament with his grandfather.  Back then I did it to be closer with my dad and I always felt it was for me.  But as we advanced each round in this tournament this year I realized how much I was getting out of this and just relished the moments spent with my son to just talk about life, learning to relax, and to tell him no matter what happened, how proud I am of him.  It wasn’t just me.  Many of the other teams were multi-generation San Franciscans who had played the tournament as youngsters and now were playing with their own children. Such a cool event and yet, such a personal and life building experience.

The kid who keeps me young

Soccer Saturdays was not something I had growing up.  Anyone who has children these days knows what it means to be a soccer parent.  You spend your days as a chauffeur and snack coordinator.  In San Francisco it has been a chance for me to see old high school friends, cousins and classmates who have children the same age.  Having the time to talk about old times and fins out about old friends has become a weekly ritual.  It just makes you realize how small this City is.

Now getting back to the Train concert, I took my wife and my best friend from high school to see Train at the reknowned Fillmore concert hall (http://www.thefillmore.com), one of those temples of music that has so much hisotry in it (more on this later).  Train inspired this posting as they were formed in San Francisco, disbanded for solo careers and just recently moved back to San Francisco to start recording together.  They told the story of how although none of them were originally from the area, they felt as though the City had saved them twice.  First by bringing them together and then, bringing them back together again.  They went through a myriad of songs all about California and San Francisco that left the 3 of us so happy that we went and so proud of the city we call home.

A few weeks later I got a message that one of my childhood elementary school classmates had passed away.  We weren’t close, but I saw the grieving that many of those classmates felt.  Although our friend died early and a rough life was pretty much the cause of death, that did not matter to us.  The outpouring of grief and emotion turned into a beautiful private vigil at San Francisco’s Ocean Beach at sunset.  Suddenly the 76 classmates were now back in touch some 30 years later, brought together by the death of one of our own.  It makes me wonder if our friend realized how much she was loved and will be missed by so many and by those who she might not have seen in so long.  My wife thought it very interesting and touching that our community was that tight.  I reminded her and our children ( they go to the same school my brothers and sister and I went to) that history repeats itself and that some day our children might be out there grieving for one of their classmates.

In getting our classmates together I even had the opportunity to go out to a restaurant owned by one of our firends.  He even comped us a great meal (http://www.betelnutrestaurant.com).  Afterwards we went to the Fillmore to see a small artist named Mat Kearney.  It turns out that  Mat’s parents have a lot of history in San Francisco and were in attendance.  They were flower children who met in San Francisco in the ’50s while working in a diner as a waitress and a chef.  Although they hade very little money they were able to see a few concerts at the Fillmore and claimed their favorites were Jimmy Hendrix and Bob Dylan.  Well now they have to add their son to that list which has brought their lives back to San Francisco full circle.  I love little stories like that.

Yes, San Francisco  has its mysterious charm and I’m sure it has healing powers for whatever it is that ails you or those around you..Los Angeles may have its Palm Trees and beautiful people, New York might have Wall St., and all the nightlife you could want, Chicago has great food and spirit, but San Francisco simply has the “it” factor that attracts and rewards those who embrace it.

1 thought on “Save Us San Francisco”