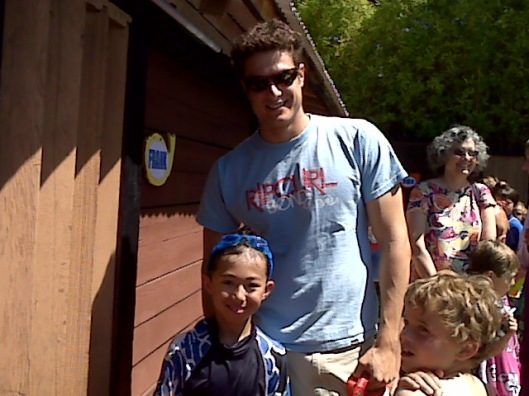 Ben Wildman-Tobriner is only the second San Franciscan to win an Olympic medal and ironically he was taught by Ann Curtis, the first San Franciscan.  Ann has a pool in Marin where I learned to swim during my summers and where my children now go to learn.  Recently, Ben showed up at the pool during our kid’s lesson so that they could touch the Olympic Gold Medal that he won at the 2008 Beijing Olympics as part of the 4×100 meter freestyle relay team (he swam in the semifinal heats).  Ben currently holds the US Record in the 50-yard freestyle in a time of 18.87 seconds. He also was the World Champion in the 50 meter free in 2007.
My other connection to Ben is that he went to the same high school I went to (years apart) and was also on my school’s swim team.  Ben is a self made kid.  It is very rare to see a kid like Ben from the inner city that is not made of swimming pools become an international swimming champion.  Our high school (Lick-Wilmerding) is not a sports powerhouse.  With only 450 kids, you usually get drafted by coaches to help fill out sports rosters.  In highschool my swiumming team was a motley gang of kids who didn’t wear speedos or skin tigh swimming caps to remove resistence.  We had maybe 8 kids on our team.  The same was with Ben years later.  Ben swam at the local boys and girl’s club in San Francisco’s Haight Ashbury district.  No pristine facilities.  It is like the the Rocky of swimming pools.
Ben went on to be a star in  the Stanford University swimming program and is now at UCSF Medical School where my wife is currently being treated for her cancer.   He is now torn between medical school and his swimming career.  Ben has a great humble head on his shoulders and has given back to the pools that helped him to get where he is today.  I only wish the other swimmer on the US team that won 8 gold medals has the same character as Ben.

1 thought on “The Olympic Wildman”