Here you leave today and enter the world of yesterday, tomorrow and fantasy – bronze inscription above the tunnel entrance to Disneyland 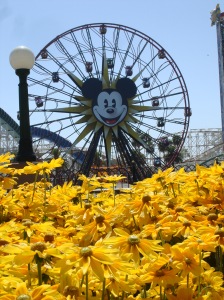 The Happiest Place on Earth

Today my wife and I had a brief celebration.  We quickly acknowledged the mark of the 2nd anniversary of her cancer surgery.  We smiled, shared a kiss and went off to work and taking the kids to school.  When she was first diagnosed I would see posts about cancerversaries.  I asked what that meant.  Was it the date from diagnosis?  Then I was told it was the date from when you had your surgery.  For the most part, most people are looking forward to their 5th cancerversary.  It is when they are considered in full remission as there have been no sign of additional tumors.  In a way it seems like a 5 year purgatory.

Two years might not seem like a long time ago but it does feel that way.  We have somehow been able to mentally put cancer behind us as best we can.  There are the daily pills, the monthly shots, the side effects, etc., but it all seems to be like raising a baby.  You have some memories, but it seems so long ago and you have new challenges and some of the old memories get thrown out the door.  Those sleepless nights, the mental anguish the weeks and days leading up to the visit to the hospital, and all the help and visits from friends the days after seem distant and mostly it is in our minds.  That said, we are surrounded by reminders every day during our  journey back to normalcy of where we have been and how fortunate we are.

We just got back from a family trip to Disneyland, the Happiest Place on Earth.  In reality it isn’t always that way.  The crying babies, the tantrums, the frustration of negotiating large crowds and the L.A. traffic are just some of the smoggiest problems that Los Angeles and the Magic Kingdom have to offer.  In the end, it might not be the Happiest Place for All, but it is still magical.

My children noticed the large amounts of wheel chairs and ill children at Disneyland.  The Make a Wish Foundation seemed to have a large presence this past week.  Then it happened.  As we rode on the the Grizzly Rapids ride at the California Adventure Park, we struck a conversation with a dad and his 3 sons who were riding in the same raft. The dad confided in me that the family had lost their mom to breast cancer at the beginning of the summer.  This trip was a small way to distract his sons before the school year got started.  The Happiest Place on Earth was suddenly transformed into a place of hope and faith.  When I told them that my wife was a cancer survivor as well, he asked how long and did the quick math.  I realized there that it had only been two years since my wife’s original surgery which took place 9/9/08.

After the ride was over, my 8-year old daughter was in a giddy mood.  She laughed that both moms in both families were too scared to go on the ride (my wife chose to stay dry).  It was my 10 year old son who nudged his sister and told her to be quiet.  He had realized what was going on and was attempting to be considerate.  My daughter suddenly realized the weight of the situation and actually teared up a little as the other family walked away.    What really hit me wasn’t the heaviness of the encounter in such a beautiful setting but not only did my usually unaware children grasp the meaning, but their show of compassion for such a young age.

I tried to get a read from my kids later on in the day, but they seemed to move on.  They had a great time running around and laughing at Disneyland, and I didn’t want to interrupt them.  In their own way, they had moved on from cancer as well.  Cancer had affected them , but in a good way. Having witnessed their grandfather’s death and their own mother’s struggle with cancer in their young lives has only given them a greater apreciation for living life to the fullest and taught them to put the past behind them while recognizing how precious their own lives may be.

We have three more years of purgatory, but I think in our minds, cancer is almost already behind us.  We are learning to live with cancer with an enlightened point of view.  Well 2 years down and the rest of our lives to go!