How do you take a crazy day and make it somewhat amusing?  You take the worst storm to hit the Northern East Coast in years, you add 20+ hours of travel, you visit the site of where you met your spouse, and then you bring the hit Reality TV Show, “Desperate Housewives of New Jersey” to the mix.

For all those caught in the panic in the NY tri-state area over Hurricane Irene I do apologize for my making light of this storm as I do realize there was some damage.  Anyone trying to legitimately escape from New Jersey today (actually yesterday) found their flights cancelled with no other options (my customer service agent from India suggested I drive to Harrisburg in the middle of the night to catch a flight backwards to Dulles).  What?  Note to United and Continental Airlines, give your foreign customer service agents a lesson in American geography!

Fortunately we got the brave idea to rent a car and drive 6 hours to Pittsburgh, fly to Houston and then on San Francisco.  Well, it turns out a lot of people had that idea.  We lined up at 8am at the Hertz counter and found people driving to all parts of the country.  Then, on the Pennsylvania Turnpike we saw cars stacked with supplies getting out of town (sure some were heading off to college).  We took a quick pit stop to Pittsburgh and visited Carnegie Mellon where my wife and I met as undergrads and hadn’t been back since.

When we arrived in Pittsburgh we found people who had even gone to catch 6am flights in Newark, NJ and were turned away and headed straight to Western Pennsylvania.  Incidentally I ran into a business colleague who appears on the Reality TV show, ” Real Housewives of New Jersey”.  I guess even reality TV was escaping Hurricane Irene. 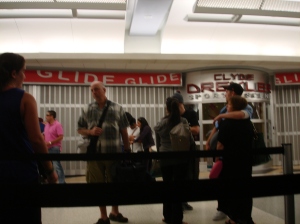 As it turns out, the whole cast (sans kids) was on the same flights with me and my family.  For you Real Housewives fans on the trip were Joe and Teresa, Rich & Kathy, Joe & Melissa, Caroline & Albert & Family ( Albie, Chris & Lauren) along with Lauren’s boyfriend and Chris and Albie’s roommate, & Chris and Jacqueline.  There were a couple young women along who I think were the travel secretaries for the show.  Additionally a couple of the brothers ( I think they are Joe Giudice’s brothers) were along.

Now those who follow know I’m a big fan of reality TV, but it was fun to see what people in general thought.  Young girls from California were going nuts.  One girl who sat next to me asked who I knew on the show as she was talking to them (I actually wouldn’t have if I hadn’t needed to exchange seats with Caroline’s children so that I could sit with my own kids).  Otherwise this group wasn’t really bothered at all.  I saw maybe one or two people bother them for a photo and as a group they all seemed cordial.  What I did find interesting was that a couple of “Jersey Shore” type guys said they didn’t watch the show because it made them look bad although they admitted that they were representative of a pretty funny stereotype, but just perpetuated things.  So basically more people outside New Jersey found it more interesting than those within New Jersey.  I knew I’m probably part of the male minority that watches the show anyway although I would say that for the most part the women looked thinner, the Joes looked shorter, and the cast seemed more subdued than you see on television.  Of course that could all be part of the fact that they had been traveling for 24 hours as well.

It looks like Northern California will be a featured road trip in Season 4 as they will be spending a week here.  Definitely some wine tasting is my guess given that no kids were along.  Perhaps Jacqueline and Chris might be visiting Ashley (if she did move out to California).

Let’s hope no tables get flipped or wine racks thrown while they are here in San Francisco this week!  In the end, it turns out a hurricane which created rough travel conditions for all turned into a somewhat amusing and entertaining day!