” Liberty lies in the hearts of men and women; when it dies there, no constitution, no law, no court can save it.”
– Judge Learned Hand 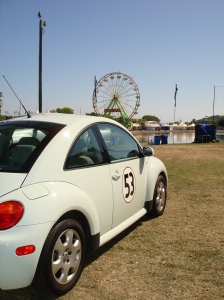 Route 53 at the Fair

4th of July is one of those holidays that has grown on me. I’m not overly patriotic, but with time I’ve become a bit nostalgic about what it means to me and those who do really honor the holiday in its truest form. It isn’t just about those who fought for our freedom and independence in 1776, but those who continue to do so. I’ve never been a big fireworks person either. Seeing the scars on the face of one of my uncles who supposedly got scorched by one when I was a little kid probably cured me of any infatuation a little boy could ever have. It probably didn’t hurt either that visiting my grandmother in San Francisco’s Chinatown where firecrackers were recklessly thrown out of windows on innocent people had once rung my ears to the point I thought I had lost my hearing.

Seven years ago when I joined in partnership with my childhood friend to start a franchise business I would never have imagined myself as someone who would be attending fairs and festivals. To jumpstart our business we became “carnies”.  Selling ice cream at art festivals and county fairs. It seemed so gauche. But we did it for a cause. You see, when we started our business we wanted to do something that would give back. We wanted to contribute to the community and that is why we created our business with Ben & Jerry’s Ice Cream. Running a small business with a philanthropic business plan to give back to the community was a pretty heady endeavor. We also wanted to do something was fun and that our children would think was cool. Our franchise is based in Marin County, just north of San Francisco and we have spent much of our philanthropic time devoted to youth arts programs, the children’s pediatric ward at the local hospital, and the national headquarters for the Guide Dogs for the Blind.  Our San Francisco franchise has been ironically contributing to the UCSF pediatric cancer unit since we took over.

So if you think that selling ice cream doesn’t put smiles on faces, this is one business owner who is proud of what he does.  This  year as we ran our day at the fair we had a time to reflect on the past several years and felt quite proud of what we’d been able to achieve.  We hadn’t made gobs of money, but we had created tons of smiles.  That is what America is about isn’t it?  Lots of people making others smile?

Ironic isn’t it?  My grandfather, who brought our family to the US sold meat scraps from a cart until he established a meat distributorship empire that fed his family.  As a butcher, he used to tell me that the most useless part of a cow were its udders and here I am selling a product from those very udders.  Of course I have more fund with it.  We’ve created this great ice cream eating contest where teams race to eat a bucket of ice cream (Vermonster) and then for kids they race to eat pints of ice cream.  It has become an annual spectacle at the local fair.  This year the winning team just missed the world record which was set 3 years ago by 0:02 seconds.

Me with the County Dairy Princesses 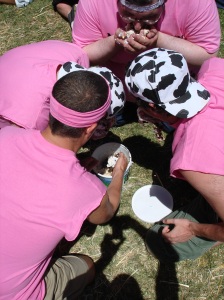 As you can tell we have a lot of fun with this.  On a more serious topic though I was really hit by the death of all the celebrities (entertainment, political, sport, etc) over the past fortnight.  Forgetting all the media hype, it struck me that this really is a piece of Americana.  A politician, an NFL quarterback, a sex symbol, a rock star, a politician, an actor/credit card spokesperson and a guy on a commercial.    As I ran tonight, I smiled at the irony.  This is truly America and it is funny all of these people were basically sharing the same obituary.  This is truly America in a nutshell.  Not because they all died close to each other, but it really showed the diversity of interests amongst the American people.  Our lives are all so diverse and we celebrate our independence in different ways and worship different icons.

I might not yet celebrate anymore those who gave us our independence over 230 years ago, but I think we should pay our respects to those who celebrated that Independence and gave us memories to last the rest of our lives.