Most everyone is proud of where they are from and holds dear to them many memories.

As a native San Franciscan, I know there are many traditions and memories that keep the natives coming home.  Some traditions are gone and no longer can be shared with my children Playland, Doggie Diner, etc..  And yet some other traditions are even better than the past. No matter what, being a native of wherever you are from, you need to embrace change and thus the San Francisco Bay to Breakers is one of those reflective of the culture of the city it represents and what makes San Francisco unique.

In it’s 99th year, the Bay to Breakers has become known as many things: The Largest Road Race in the World, The San Francisco Fun Run, The Biggest party in Sneakers…. but attracts all types. Where else can you see World Record Kenyans, costumed avatar runners, Centipedes (runners tied together who need to run in a circle at every mile marker), people pushing kegs, and yes, runners au naturel.

I’ve run the race approximately 15 times, my first coming as a 10 year old the last almost 20 years ago, but I took my son out to watch this morning in the chilly damp air in Golden Gate Park for a good laugh, some world class athletics, and a preview of our first run next year to cement his stature as a “True Native San Franciscan”. The race grew to as many as 100,000 runners back on the 75th anniversary and there were around 60,000 registered runners (an estimated 15K “fun runners”.

Make sure to set your plans for the 3rd Sunday in 2011 for the 100th running and look for registration details here: http://www.ingbaytobreakers.com/

Please see attached photos for some of this year’s costumed highlights.  Don’t worry, I have edited this for frontal nudity! 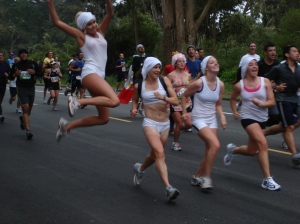 Bay to Breakers is a party

Below is a link to my Facebook page with all of my photos (yes, including the nude ones) of the top runners, fun runners, costumed runners, etc.