“Don’t you know I’m still standing better than I ever did. Looking like a true survivor, feeling like a little kid”
–  I’m Still Standing, Elton John

I’ve been waiting for Valentine’s Day for a while.  I’m not a big believer in the day as like many people say, you should treat everyday like it’s Valentine’s.  Well that’s easier said and done.  I like to thing that I show my love everyday anyway.  For me Valentine’s is that day where I show more than ever how I feel and make just that little special effort more.  Of course this year was more special to me and my wife and I wanted her to know how much I appreciate her.  I had been offered tickets to a show in Vegas and debated between Love – Cirque du Soleil and Elton John’s – Red Piano.  I’ve always been the Carpe Diem person in the relationship and since we’d seen four different Cirque shows before and I felt like Elton John is one of those iconic performers you have to see, I chose Elton John.  I was not to be disappointed.  This day would be full of wonderful moments each of  which would make the day special in so many ways.

I can recall only flying one other time in my life on Valentine’s.  It was a snowy day in the East when I flew from Chicago to Raleigh to be with my then fiancee back in 1994 right before we got married.  A 90 minute flight turned into an all day affair because of the weather and by that evening we were traumatized.  This Valentine’s flight was much smoother.  Ironically I finished the book “This Time’s A Charm” by Don Wilhelm, just as we landed in Vegas.  As we approached Vegas I kept pointing to passages in the book and having my wife read it.  Real life inspiration and all around good attitude about living life to it’s fullest in the happiest way is all I can say about the book and I will dscuss this in more detail when I host Don on this blog on March 1st.

With less than 20 hours in Vegas we took that attitude and had a blast.  We walked all over the Casesar’s Palace resort and got the lay of the land.  This would be the first time in a while that I did not gamble a penny.  I will write a review of the hotel at a later fay, but the new Agustus wing rooms were great and we got a chance to even run into a professional basketball player that I think was shocked I knew his name ( Leon Powe is one of the more feel good stories in the NBA today).  His story should be read even if you don’t follow sports.  He is truly a wonderful human being and very humble despite all the accolades that he has received. 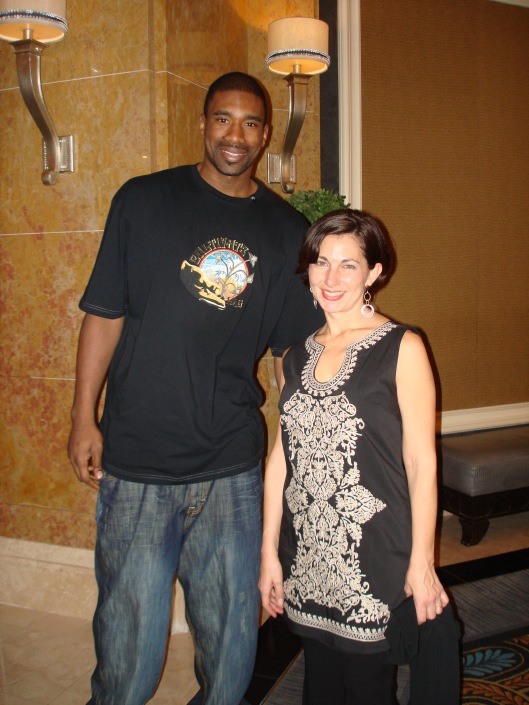 Leon Powe and my wife

We ate dinner at Bradley Ogden (a bit of a splurge) as I had made reservations before the show.  Our waiter enjoyed our husband/wife bickering over what to order.  The usual thing about changing my order because I didn’t want to order the same thing and then my getting chastised for being boring by ordering a Caesar’s Salad except when I listened and said I’d order the Foie Gras, she told me that was unhealthy.  Carpe Diem I told her. We’re living life right?  We’re celebrating, right?  So there it was, Foie Gras, followed by Risotto accompanied by a nice LaRoache Pinot.  Once dinner started we talked about our upcoming trip with the kids and how blessed we are by their presence in our lives.  Sure we want them to improve their manners and learn more of life’s social graces, but they are relatively easy children to manage.

As I mentioned, Elton John’s – The Red Piano was great.  Full of outrageous costumes, videos, and blow up dolls (cherries, bananas, breasts, roses, legs with garters, etc) along with balloons and confetti falling from the ceiling it was 90 minutes of toe-tapping fun from Benny and the Jets to Believe to Someone Saved my Life Tonight (my wife’s favorite) to I’m Still Standing (my favorite).  The words all had special meaning as we held hands and swayed.  The fact that the show’s theme was all about love made watching this on Valentine’s all the more special.   The video below was the romantic encore.  It set the mood just right:

That evening we lived like kids.  We went to one of the hottest clubs in Las Vegas.  Mind you this was Valentine’s and thus the party was crowded with pretty young people.  The night was hosted by Heidi Montag and Spencer Pratt of The Hills.  We were probably twice the age of most people and probably one of only a handful of couples in there that have children.    Either way the atmosphere was vibrant and young and we felt so alive that we stayed up until 2:30am  (way past our curfew), leaving us little time to rest before getting up and checking out this morning.  Most importantly my wife and I had fun giggling about the scene, amazed that us oldies were hanging out withe youngsters and a couple guys offered to buy my wife some drinks!  She was so flattered and in the most round about of ways, that just made my wife let her hair down and forget about the night as her rejuvenation, but rather as her just remembering what it was like to take what life gives you and to run with it.  We never have PDA, but just kissing on the dance flow while listening to house music and having some 20-somethings say that we looked so in love, was kinda nice.

In the end it was a perfect Valentine’s evening.  It was a celebration of our love and the beginning of our life where we take the anxiety and worries of cancer and put them behind us as much as we can and move forward with a life we will be happy about living.  The smiles on my wife’s face were so wide last night and I held onto them tight because I hadn’t seen her so lively in months.  In many ways it was a zest in her look I’ve never seen before.  She looked so gorgeous because of it.

So much for this Hallmark Holiday.  It was really an enlightening Valentine’s and will be one of the top days in our life.

3 thoughts on “Someone Saved My Life Tonight”