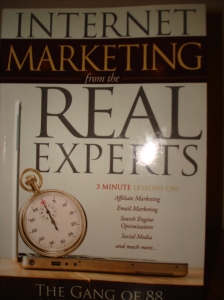 At our recent Affiliate Summit, the organizers, Shawn Collins and Missy Ward unveiled their new book Internet Marketing From the Real Experts, a compilation of lessons from many of our colleagues in the internet marketing world.

The book has quickly risen into the top 1200 list on Amazon with very little marketing….or should I say traditional marketing.  The beauty of a book written about internet marketing is that it will likely be marketed well by those who wrote it.  In fact, the Gang of 88, as the contributing writers are called, are all marketing the book in their own way in blogs, on Facebook, on Twitter, etc.  Shawn and Missy also gave an incentive by giving all people who wrote a review online a silver pass to their next Affiliate Summit in New York in August.

The book is a quick read and for those of us in the business many of the “3 minute anecdotes” might seem trivial but for someone just entering the game and wanting some quick reference points will find this book to be a good useful starting point.  While I  found myself shaking my head at some passages I also found myself nodding my head at others.  There are probably sections I might never read, but that is why the book was written this way.

The book is written so that you can skip around and find the parts relevant to you.  Want thoughts on Twitter and Social Media?  There is a chapter.  Want to know about SEO and SEM?  Video?  There are sections dedicated to those topics as well.  The articles are based upon the writings from the first 7 issues of the of their magazine Feed Front.  Some might look at the title and say, “experts”?  Well maybe the writers aren’t experts, but they are real people in the industry who do the dayd to day work.  Thay aren’t professors or pontificators, but really the people on the affiliate line on a daily basis.

I could go on and on, but I don’t want to reveal too much about the book because I think those interested should purchase the book themselves.  Still not sure if this book is for you and perhaps would like a reason to purchase a marketing book? At $14.93 on Amazon the book is a bargain, but not just for the knowledge gained, but because all proceeds from the sale of the book go to benefit and help the Fight Against Breast Cancer, a cause near and dear to the hearts of the authors and those in the industry. 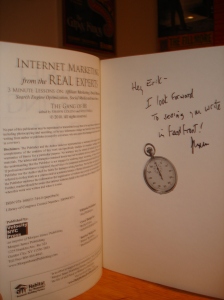 What Should I write?

While at the Summit I kiddingly asked Shawn to sign the copy included in my bag.  He laughed and I told him I wasn’t kidding.  Admittedly he was more distracted by the football game on the screen in front of him as his beloved Jets were playing in the playoffs.

I didn’t read what he wrote until returned home.  Hmmmmm, looks like I might have to write something for Feed Front to be included in the next edition.  Perhaps the ongoing struggle of running affiliate programs within larger corporations.

1 thought on “Internet Marketing from the Real Experts”

Error: Twitter did not respond. Please wait a few minutes and refresh this page.